The session also featured a lecture by Howard Frumkin on the health of the planet and a presentation of the call for research projects linked to planetary wellbeing, endowed with 146,000 euros, created to support researchers and promote multidisciplinary research around this topic. 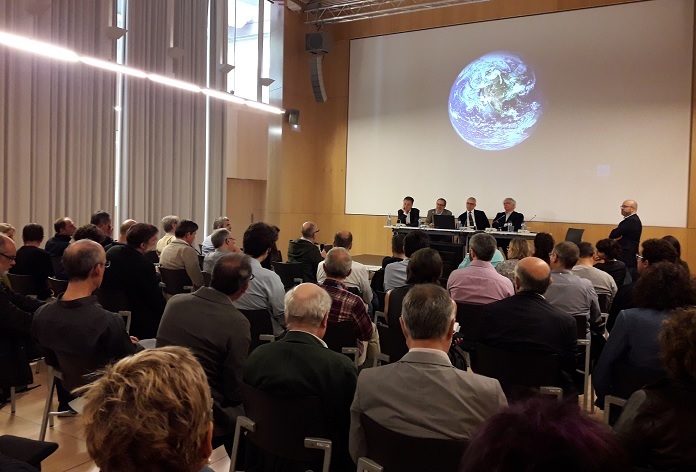 “UPF feels fully called to act in view of the fact that the planet’s natural resources continue to deteriorate at an unprecedented pace and recognizes this as an emergency that, as proposed by the UN, requires drastic strategies”. This sentence is part of the institutional climate emergency declaration announced by the rector Jaume Casals during the second plenary session of the Planetary Wellbeing initiative.

With this emphatic statement, the rector highlighted the University’s commitment to this global problem. In fact, within the framework of the Planetary Wellbeing initiative, the University has just launched a call for research (applications can be submitted until 31 May) for projects around this theme. Endowed with 146,000 euros, UPF is making a concerted commitment to contribute to this global challenge through two strategies: creating critical mass around this issue, supporting a new generation of researchers and academics who feel called by this matter to act; and promoting and encouraging multidisciplinary and transdisciplinary research and collaboration around it. Thus, a Planetary Wellbeing Conference has been arranged for 5 June at UPF.

The University has just launched a call for research projects around Planetary Wellbeing endowed with 146,000 euros. It is a concerted commitment to contribute to this global challenge.

For Josep Maria Antó, scientific director of ISGlobal, and Josep Lluís Martí, vice-rector for UPF innovation projects, coordinators of the UPF Planetary Wellbeing project, it is essential to act “urgently” in view of this phenomenon. In fact, during the presentation of the International Panel for Climate Change held in Katowice last October 2018, it became clear that if the current trend in emissions continues and humanity does not act, the increase in the average temperature of the globe will increase beyond the 1.5ºC between 2030-2050 and, to prevent this, we must reduce CO2 emissions by around 45% by 2030 and eliminate them entirely by 2050. In this sense, the University is currently also working on the development of a diagnostic of environmental impact that measures carbon footprint and enables establishing goals and strategies for radical change that will be included in the first UPF Sustainability Plan.

Regarding its infrastructure, the University plans to build a new building of 7,000 m2 to develop the Planetary Wellbeing project on land it has at the old Fish Market. The work is part of the “Ciutadella of Knowledge” project, undertaken with the collaboration of Barcelona City Council and the Generalitat (Government) of Catalonia with the aim of converting the area of Ciutadella into a leading hub of scientific knowledge in Europe, as explained by its coordinator, Francesc Subirada.

UPF plans to build a new building of 7,000 m2 to develop the Planetary Wellbeing project on land it has at the old Fish Market.  The work is part of the “Ciutadella of Knowledge” project, undertaken with the collaboration of Barcelona City Council and the Generalitat (Government) of Catalonia.

The session also included a conference by Howard Frumkin, director of the “Our Planet, Our Health” programme of the Wellcome Trust of London, on the health of the planet. Frumkin dealt with work carried out in three areas (climate change, global food systems, and cities) and highlighted that the global health strategy should include a diagnosis of the effects that the changes on the planet have on human health; the prevention of, or if this is not possible, adaptation to them; effective communication to create awareness among policy makers and society in general; and the development and implementation of active policies.