Rectors Oriol Amat (Pompeu Fabra University) and Joan Guàrdia (University of Barcelona) signed a collaboration protocol during an event that took place on 3 March, at noon, on the Ciutadella campus. The protocol includes four specific actions linked to the boards of trustees of the centres that are to occupy the new building of the BIST, to the research of the Barcelona Zoo Foundation, to the cooperation between the IBE (CSIC-UPF) and the IRBio (UB), and to the UPF Planetary Wellbeing project. 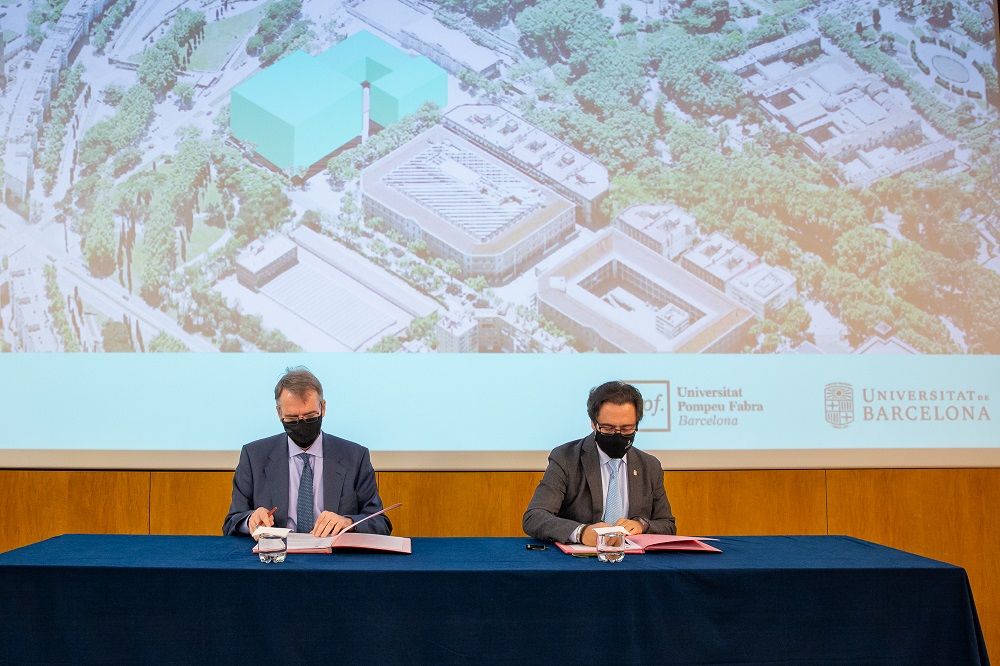 Within the collaboration framework between Pompeu Fabra University and the University of Barcelona to contribute to the social, economic and urban development of the city and of the country, the two institutions have signed a protocol in order to join forces for the projects of the Mercat del Peix, within the Ciutadella of Knowledge initiative, and Can Ricart, promoted by the UB with the participation of UPF.

Rectors Oriol Amat (UPF) and Joan Guàrdia (UB) have signed a collaboration protocol, for a period of four years, which includes four concrete actions: participation on the boards of trustees of the three centres that will host the BIST/Precision Medicine building; the development of the Zoo Research project; cooperation between the Institute of Evolutionary Biology (IBE, CSIC-UPF) and the Institute for Research on Biodiversity (IRBio, UB) and cooperation within the framework of the UPF Planetary Wellbeing research and innovation project.

Oriol Amat: “The addition of the UB will allow us to create new collaborative spaces to progress towards cutting-edge research within the framework of a modern, collaborative project addressing the key challenges of the 21st century”

The ceremony for the signature of the protocol took place on 3 March, at 1 p.m., in the multipurpose room of the Mercè Rodoreda building on the Ciutadella campus. In addition to the two rectors, also present were Francesc Subirada, director of the UPF initiative for the Ciutadella of Knowledge; Sito Alarcón, director of Barcelona Zoo; Salvador Carranza, director of the Institute of Evolutionary Biology (IBE, CSIC-UPF); Núria Bayó, programmes director of the Barcelona Institute of Science and Technology (BIST); and Josep Lluís Martí, UPF commissioner for Planetary Wellbeing. Maria Feliu, vice-rector for Doctoral Studies and Research Staff; Mercè Segarra, vice-rector for Entrepreneurship, Innovation and Transfer; and Olga Lanau, general manager of the UB Group, who attended the event on behalf of the UB. 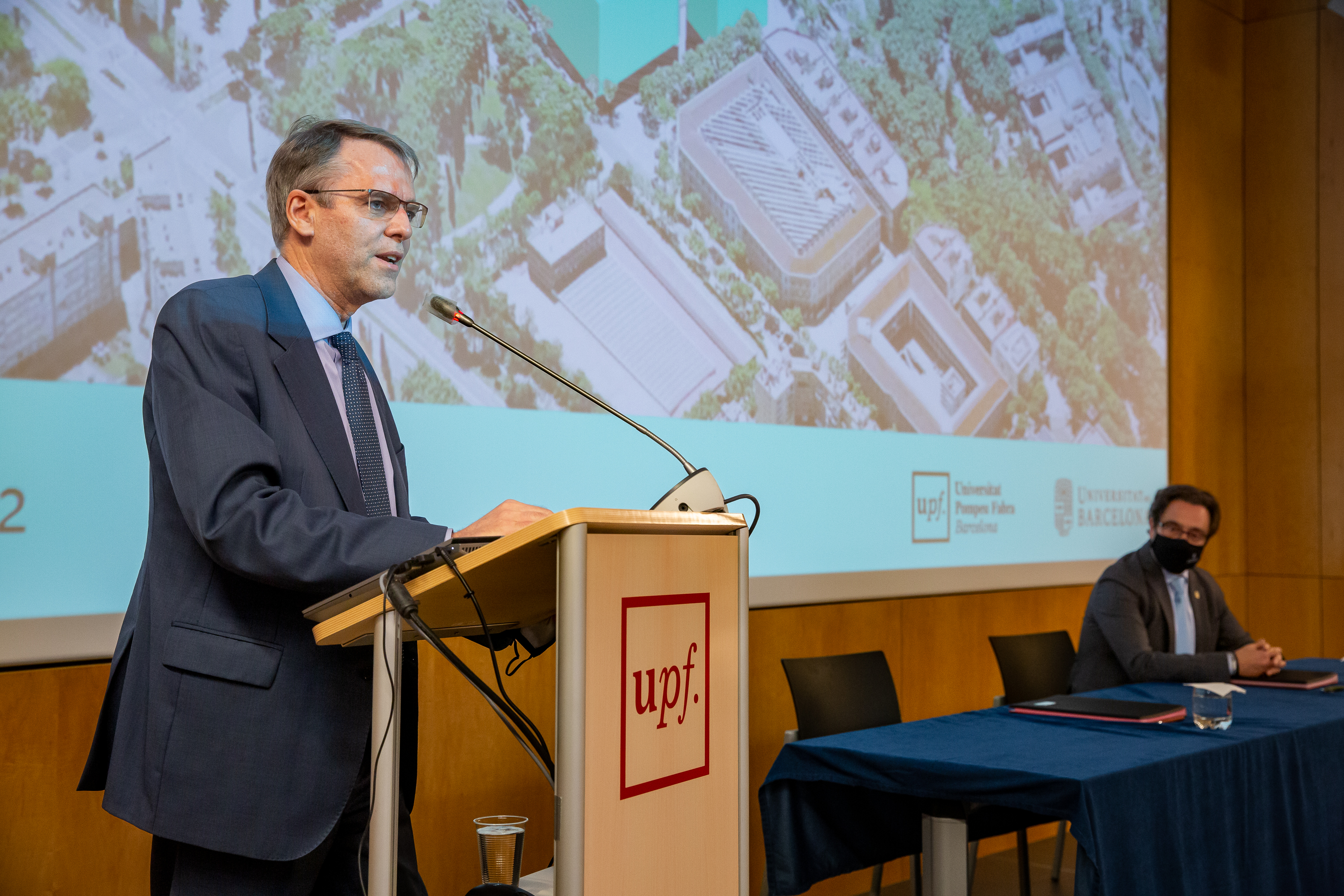 commitment by UPF, with the collaboration of the BIST and of the CSIC, to make Barcelona a knowledge hub in the fields of biomedicine, biodiversity and planetary wellbeing. The proposal also envisages the urban development of the Ciutadella area, which will become one of the major urban transformations undergone in Barcelona in recent years, and which, once again, reflects UPF’s engagement with the city”. The UPF rector added that “the addition of the UB will allow us to create new collaborative spaces to progress towards cutting-edge research within the framework of a modern, collaborative project addressing the key challenges of the 21st century”.

Meanwhile, the rector of the University of Barcelona, Joan Guàrdia, offered a positive appraisal of its collaboration with UPF: “This agreement lays the foundations for two key projects, based on biomedical experimentation (Mercat del Peix) and artistic disciplines (Arts Campus), in Can Ricart. These are areas where the Catalan university and research system has become a leading player on the international scene. With these initiatives, this leadership will be further strengthened”.

The ceremony, which was opened with a welcome speech by Oriol Amat, included a presentation by its directors and managers of the different projects involved: the Mercat del Peix project (Francesc Subirada); the Zoo Research project (Sito Alarcón); the Biodiversity project of the Institute of Evolutionary Biology (IBE, CSIC-UPF) (Salvador Carranza); the Precision Medicine project of the Barcelona Institute of Science and Technology, BIST (Núria Bayón), and finally, UPF’s new Research and Innovation Centre for Planetary Wellbeing (Josep Lluís Martí).

Francesc Subirada, in his presentation, highlighted that the Mercat del Peix is located in the centre of the city of Barcelona, and that its goal is “to transform this centre into an area of knowledge understood as science, innovation and culture”. And he added: “rather than creating a new pole, what we will do is improve a very powerful research environment, which already exists today”. 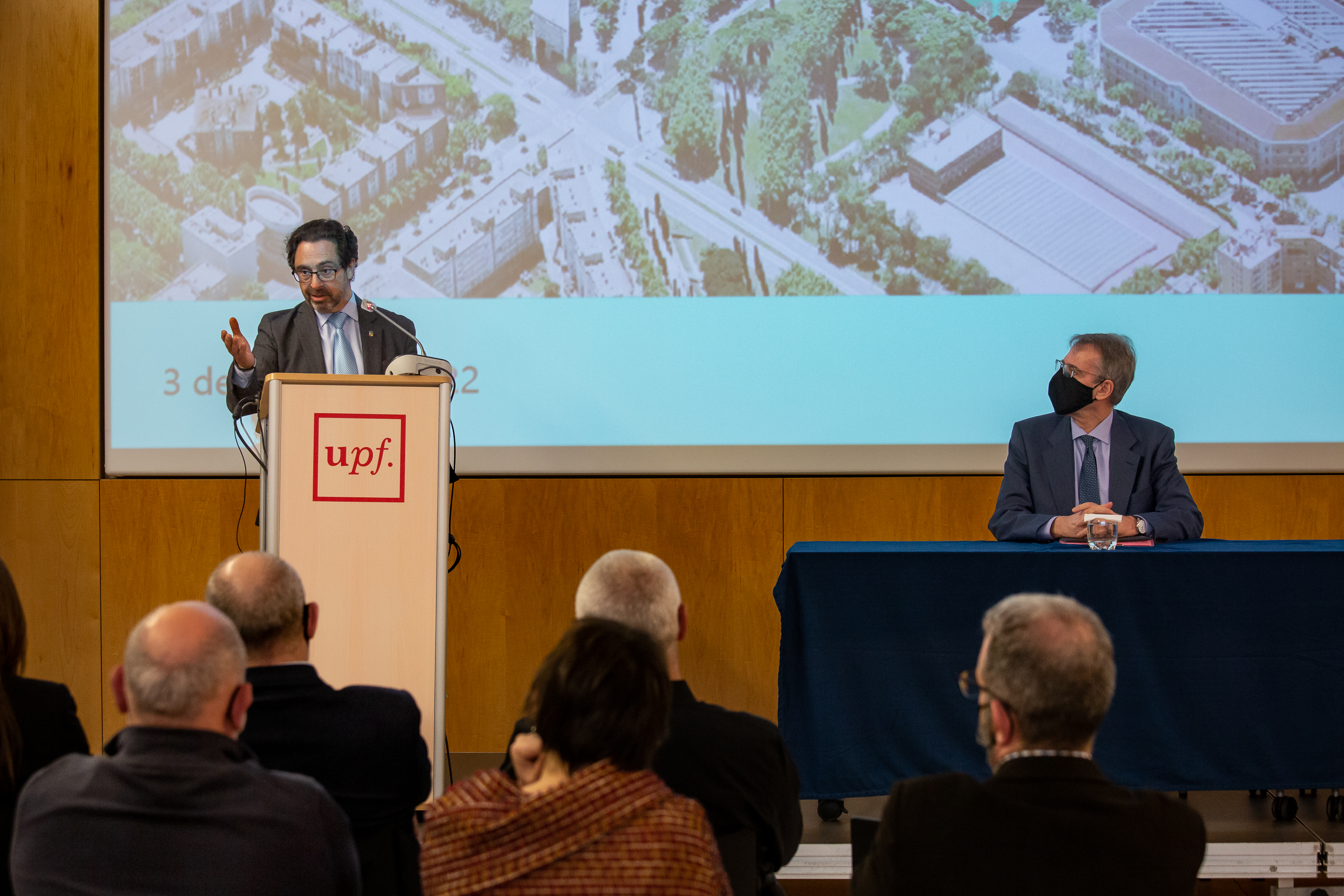 In the second part of the proceedings, Oriol Amat (UPF) and Joan Guàrdia (UB) signed the collaboration protocol for the Mercat del Peix project, within the framework of the Ciutadella of Knowledge, which was followed by the speeches by the two rectors

Joan Guàrdia emphasized that “the most important thing about signing this protocol is that we have involved powerful and brilliant people, we have built a reality that we will have to explain very well”. The rector of the UB stressed the interconnection between all the different nodes that make up this network, because without such interconnection, “an isolated node would not survive, or would do so most precariously”. He also stated that the Catalan university system has the opportunity to work on a shared project, in a structured research network.

Oriol Amat, for his part, wished to underscore two concepts that, in his opinion, defined the essence of the ceremony very well: synergies and planetary well-being: “Today's event is a reflection of what synergies means: in this country, when we join forces, the result in exponential”. Regarding planetary wellbeing, the UPF rector stressed that “this is one of the University’s main, long-term strategic lines, and we will now be able to work together with the UB”. Finally, he asserted that to move forward we must take advantage of the current institutional ecosystem (“which has not always existed”).

Following the event, which took place in the Mercè Rodoreda building, the participants paid a visit to the area of the Mercat del Peix, beside the University’s Ciutadella campus.

Broad collaboration that will be materialized through four actions:

In an initial phase, this collaboration will enjoy the effective participation of the UB and UPF on the board of trustees of the three centres that will carry out their activities in the BIST/Precision Medicine building: the UB in the Institute for Bioengineering of Catalonia (IBEC) and the Barcelona Institute for Research in Biomedicine (IRB), and UPF in the Centre for Genomic Regulation (CRG). Thus, both the UB and UPF, as partners in the project and members of the boards of the three research centres, will participate in the present and future goals and strategies of the BiomedBIST.

Also in the short term, the two institutions will strengthen and redirect research linked to the Barcelona Zoo Foundation and coordinate efforts to jointly implement the project driven by the management of the Zoo to constitute a pole of knowledge and research on biodiversity conservation.

Another action, in this case in the medium term, is the possibility of establishing scientific collaborations between the Institute of Evolutionary Biology (IBE, CSIC-UPF) and the Institute for Research on Biodiversity (IRBio, UB).

Finally, UPF, in reference to its research and innovation project for Planetary Wellbeing, believes that, together with the UB, future avenues of collaboration between the institutions can be discovered and explored as more disruptive and committed proposals in an interdisciplinary field.

In addition to these four concrete actions, the agreement reflects that the two universities consider the most appropriate and necessary presence of the Autonomous University of Barcelona both in respect of the BIST/Precision Medicine building, with the participation of the UAB on the board of trustees of the Catalan Institute of Nanoscience and Nanotechnology (ICN2), which will carry out activities in the new building, as well redirect research linked to the Barcelona Zoo Foundation, or in reference to undertaking collaborations in the area of Biodiversity. 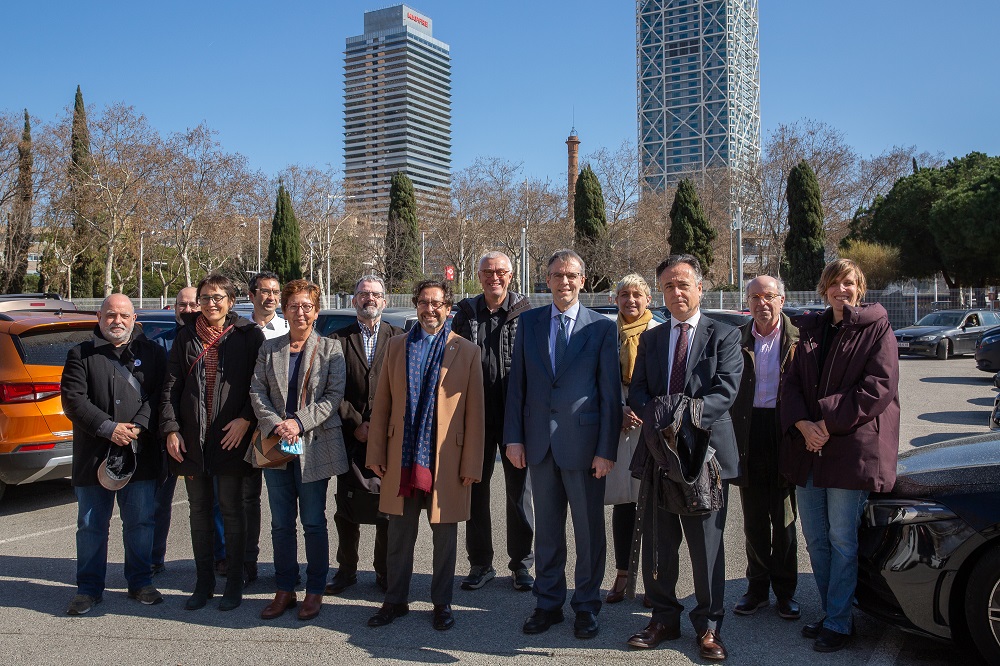 The signed protocol mentions six general areas of collaboration between UPF and the UB: the relationship with the territory (increasing academic and scientific presence in the 22@ district and maintaining cooperation with Barcelona City Council and the institutions and companies in the area); research (establishing a series of good practices for the implementation of high impact, high added value interuniversity projects); teaching (creating innovative interuniversity degrees and postgraduate programmes, of an international and professional nature).

The three remaining areas are institutional affairs (participating in innovative alliances between academic, governmental and philanthropic institutions); university social responsibility (developing a template for USR), and finally funding and governance (exchanging ideas and proposals to promote a review of the system for the funding of public universities). 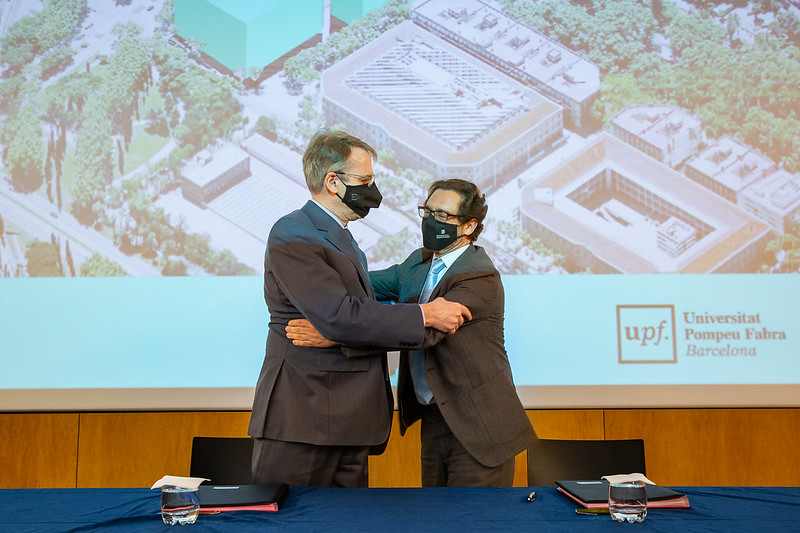